LC: To analyse opening paragraphs that combine setting and character.

LC: To write an opening that combines setting and character.

What have you noticed about them?

Taken from the Snow Queen story

In the poorest part of a large town, a boy and girl called Kay and Gerda lived opposite each other with their families. Outside each house was a wooden trough in which herbs, flowers and a rose tree grew. The two trees grew up and intertwined, forming an arch between the houses. In the summer, Kay and Gerda would sit under its blooms and play or read for hours at a time.

Taken from The Firework-Maker's Daughter

A thousand years ago, in a country east of the jungle and south of the mountains, there lived a firework-maker called Lachland and his daughter Lila.

Taken from Charlie and the Chocolate Factory

Little Charlie Bucket and the whole of his family, which was six grown-ups, lived together in a small wooden house on the edge of a great town. The house wasn't nearly large enough for so many people, and life was extremely uncomfortable for them all. There were only two rooms in the place altogether and there was only one bed. The bed was given to the four old grandparents because they were so old and tired. They were so tired that they never got out of it.

Did you notice that they all described characters and their setting?

Can you find any noun phrases that were used to describe the setting and characters?

Use the above story openings to help you write your own based on the picture below.

It MUST describe BOTH setting and character.

Record your opening in your exercise book. 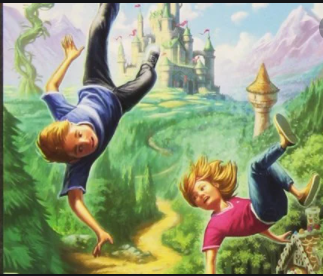 You can select one of the scaffolded frames below to help you write your opening.

Taken from the Snow Queen story

Taken from The Firework-Maker's Daughter

Taken from Charlie and the Chocolate Factory