LC: To create sentences with fronted adverbials that are punctuated accurately.

Fronted adverbials are words or phrases placed at the beginning of a sentence which are used to describe the action that follows.

We will be focusing on fronted adverbials that describe

'when' and 'where' the action takes place.

Before sunrise, Zack ate his breakfast.

After the rain stopped, Sophie went outside to play.

Inside the gloomy forest, a loud howl could be heard.

In the attic, I discovered an unusual box with no label.

Have you noticed fronted adverbials are marked with a comma?

You are going to create sentences with fronted adverbials to describe the events that take place in the Dick Whittington story pictures.

See the example below: 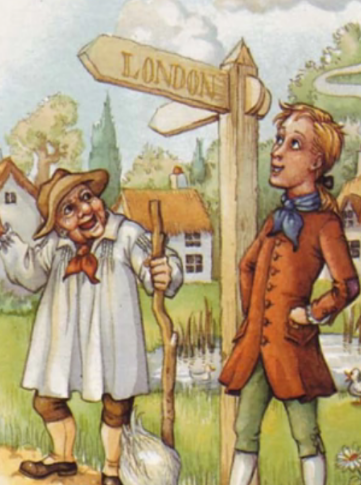 In the centre of the village, Dick Whittington spoke to an old man

before heading to London.

Early in the morning, Dick bounded out of his house because he was

eager for an adventure.

'Fronted Adverbials for 'when' and 'where'