LC: To write the build-up and problem to a story.

Today, you are going to continue to write your fantasy story using your boxed-up plan.

You will need the build up and problem part of your plan in order to do this. 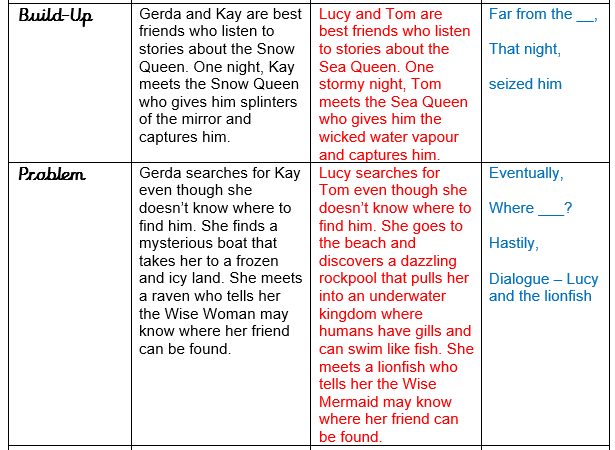 Before you begin, orally retell the build-up and problem part to your story so you know what it must include. You can then work on the extra detail when you come to write it.

The build-up MUST include complex sentences, some with adverb starters, that are punctuated with commas accurately.

The problem MUST include dialogue that is punctuated accurately.

You can use the Snow Queen T4W text and the  Sea Queen teacher text to help you.

Far from the palace, there lived two children called Kay and Gerda who were the best of friends. One cold and frosty afternoon, they sat and listened to Gerda’s grandmother tell stories about the Snow Queen. Kay’s eyes grew wide with excitement and he longed to meet her. That night, while snow was falling, Kay opened his bedroom window and searched for the Snow Queen. Slowly, one snowflake grew in size until it became a dazzling figure. It was the Snow Queen. She smiled, blew him a kiss and sent two splinters of the magic mirror towards him so that he would be as horrible as her. Then, she seized him by his clothes, pulled him out through the window and took off into the night sky.

Eventually, everyone heard of Kay’s disappearance and Gerda planned to find him. Where could he be? She went down to the fast-flowing river to begin her search. Once she was there, she discovered a mysterious boat that she had never seen before. Perhaps the boat would lead her to Kay. Hastily, she climbed onto the boat. As soon as she was on the boat, it began to glide away from the shore. It took her down river and sailed into a bitterly cold and frozen land. After a while, it stopped so Gerda jumped out. As Gerda was wondering what to do, she came across a raven with black beady eyes that could talk.

“Where are you going all alone in this dangerous land?” the raven asked.

“I’m looking for my friend, Kay, who is missing. Have you seen him?” She said anxiously.

“I’m not sure but I think my friend who is a wise woman will know if he has been seen in this land,” he replied slowly.

The raven found Gerda a reindeer to ride on before they set off on their journey to the Wise Woman.

Far from the depths of the ocean, there lived two children called Lucy and Tom who were the best of friends and lived near the seaside. One stormy afternoon, they sat and listened to Lucy’s grandmother tell stories about the Sea Queen. Tom’s eyes grew wide with excitement and he longed to meet her. That night, while the wind-whipped waves crashed against the shore, Tom went down to the beach in search of the Sea Queen. Slowly, one wave grew in size until it became a crystal-clear figure. It was the Sea Queen. She smiled and blew him a kiss that was filled with the enchanted water vapour which he then breathed in. Then, she seized him with her watery hands and pulled him down into the depths of the sea below the surface of the waves. Tom had vanished.

Eventually, everyone heard of Tom’s disappearance and Lucy planned to find him. Where could he be? She went down to the sandy beach to begin her search. Once she was there, she discovered a dazzling rockpool that she had never seen before. Hastily, she raced towards it and gazed into the water. Suddenly, the water rippled and a powerful force pulled her down into the rockpool. It took her into a underwater kingdom where humans had gills to breathe and could swim like fish. As Lucy was wondering what to do, a lionfish with spiky fin rays came floating by that could talk.

“I’ve not seen you around these waters before. Where are you going?” the lionfish asked.

“I’m looking for my friend, Tom, who is missing. Have you seen him?” she said anxiously.

“I’m not sure but I think my friend who is the wise mermaid will know if he has been swimming around this land,” he replied slowly.

The lionfish and Lucy glided through the ocean on their journey to the wise mermaid.

Use the scaffold below to help you write the build-up and problem to your fantasy story.

Record your build-up and problem in your exercise book.