A volcano is an opening in the Earth’s crust that can be found on the boundaries of tectonic plates (huge, rocky pieces that make up the Earth’s crust). When a volcano erupts, ash, hot gases and molten rock from under the Earth’s crust find their way to the surface. The ground may crack open so that lava can slowly flow out or it may suddenly explode into the air. Volcanic eruptions can be very destructive, but they also form new mountains, islands and rocks. Rocks formed in volcanos are called igneous rocks and have crystals in them. Basalt, granite and gabbro are all examples of rocks formed in volcanos. 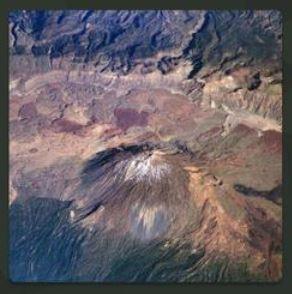 The first image shows Mount Teide, an active volcano on the island of Tenerife that is 3.7 km high and 20 km across. 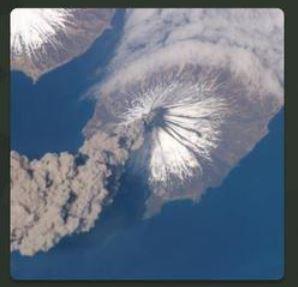 The second image shows Mount Cleveland, a very active volcano in Alaska that is 1.7 km high and 8.5 km across. The volcano was erupting when this photograph was taken and the image shows a plume of ash being carried away by the wind. 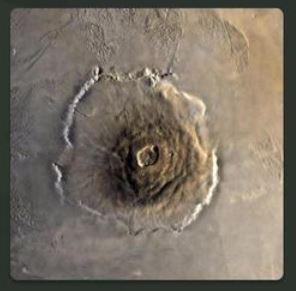 The third image is Olympus Mons, which is the largest of the three volcanoes at 25km high and 624km across. It is actually the largest volcano in the solar system and can be found on Mars. Olympus Mons started forming almost 100 million years ago and scientists are unsure as to whether it is still active. The last eruption was 25 million years ago.